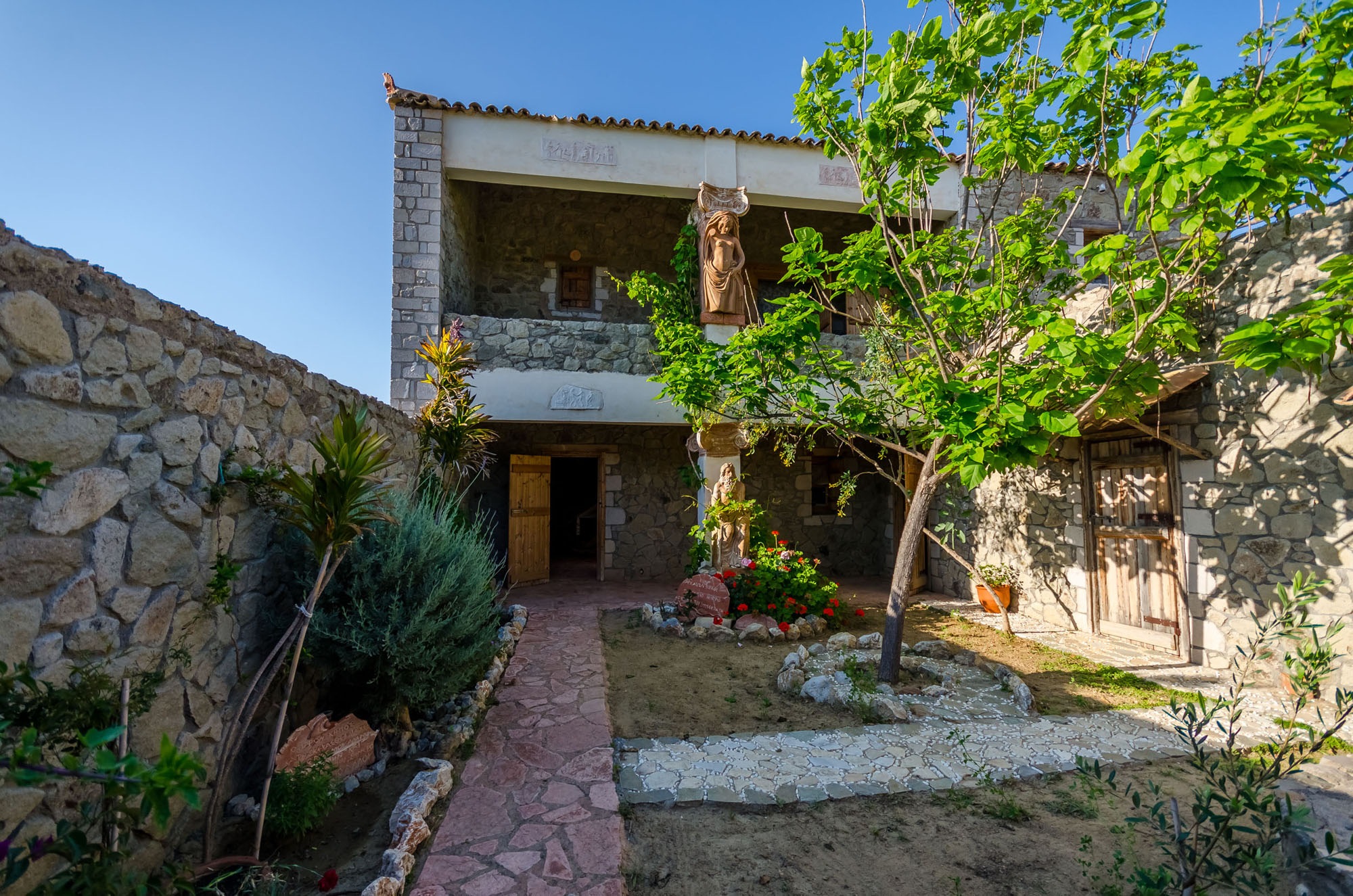 The replica of the house in Hippocrates garden is built on the standards of ancient houses in the 5 century b.C. Entering the courtyard we meet the statue of Zeus Erkeiou. There was the altar of the ancient ancestors who made offerings to the gods for help and abundance.Father Zeus was the protector of the house and of the earth. One of the basic properties of Zeus was the hospitality and essential feature of Greek culture to today. Moving inside we get to the main house where is the fireplace and the bath. Baths existed before the 5th century and several cities had even shower . In houses of this century were seated bathtubs and water coming from springs or public fountains. In public places there were toilets replica of them you will find in our bathroom.

In the house you can see furniture that are predominantly found at the streets of Greek cities and have been collected with great love. As we stand at the center of the house you will see the “Estia” (fire place) where the sacred fire burned all day. The “Estia” (fireplace) covers basic needs of families as warm, preparation of food, the gathering of family and prayer. The goddess “Estia” protected the home and family. She was the archetype of motherhood and warmth. On the Right there is the kitchen and next to it the bathroom. Most houses were on the ground floor but as Athens was flourishing economically and the inhabitants had the opportunity to build, there were also some with two floors as our “Oikos”.

Upstairs is the “Women room”, which consists of the “Istion” the master bedroom and child’s room. In “Istion” women used to weave clothes on a loom. Relative mural you can see on the wall. This loom was the ancient method of weaving. The furniture is hand carved like the buffet and chairs. In the main bedroom, the bed is tied with ropes and covered with handmade rugs of the last century. The mural is a copy from ampulla of fifth century and represents a woman and a young warrior who turns the war by giving his helmet. You can also see the handmade ceramics (copies of the era) that show the conjugal life. Photos of the last century connect the history of Greece through the succession of generations. The next room – the child’s room – is hosting a library with books for children and world literature as well as a photography exhibition from the third world.

The children’s library is an effort to inform people about global ecological and cultural problem so that all visitors understand the need for cooperation among peoples for the future of our children. There, are gathered donations for the third world. Our library is a lending library and you can find info-leaflets offered by all Greek organizations in environmental protection.

In the court yard you can also see the “Andron’, which is the main room of men where philosophers were gathered in the evenings and made symposiums. Almost always there was a room  before Andron” in order to keep the privacy. Women were not allowed to enter and participate in symposiums, although men respected them.